Conversations with care homes a series by My Home Life England

You can see more Videos from My Home Life here >>

A message from My Home life to the care home community:

You are doing an incredible job in challenging circumstances. You continue to make such a positive difference to people’s lives – thank you. We see you, we appreciate everything that you are doing, and we want you to know that My Home Life England is always here for you. Keep up your fantastic work and please do get in touch if you are able, we’d love to hear from you.

About My Home Life

My Home Life was founded in 2006, by National Care Forum in partnership with Help the Aged (now Age UK) and City, University of London.

It is a social movement for quality improvement in care homes that has spread nationally and internationally.

The success of My Home Life lies in our four evidence-informed guiding principles: Developing best practice together, Focusing on relationships, Being appreciative, and Having caring conversations. 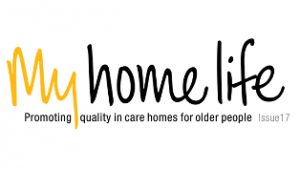 “A diagnosis of dementia for a person is also a diagnosis for the whole family.”– Four letters that make communicating with a person with dementia more real.>>

Originally an RGN nurse in the NHS, she went on to gain a BSc in Nursing Studies, a Diploma in Orthopaedics and an MSc in Health Sciences. Her passion for the good care of older people shines out of her and she has been the Manager of Barchester Queens Court Care Home for 23 years, what she doesn’t know about nursing home care, is hardly worth knowing.

Queens Court locked down early in March and this means that my fortnightly conversation group with residents, which has been going for about a decade, also had to be temporarily suspended. I really miss the lovely residents in my Sarah’s Chats group, but have stayed in touch with them with intermittent postcards from the coast. Reassuringly, one of our group has even taken up occasional correspondence with me!

Last week, Shaaron and I had a phone conversation, as I was keen to hear how she and everyone else is coping. She sounded comparatively cheerful, given the circumstances, which pose so many challenges….

“The staff have been really shell-shocked. We have lost some staff through natural wastage – one of our full-time staff left to work at a different care home early on in the Lockdown. Only the really brave care workers were coming in for about the first month and I was very concerned about the psychological state of the staff – we were all very sad.

‘We had to implement special protocols for infection control from day one’.

And then there are the reports… the endless reports. Everyone wants reports, Public Health England, Merton Council, the CQC, the London Capacity Tracker. Everybody wants it written down, which means a lot of extra work.

The laundry has been really challenging, because nothing can be worn or used more than once without fastidious cleaning, so the washing machines have been very busy and our maintenance man has been living from moment to moment to ensure that everything keeps running. He has never had to work so hard.

Barchester Healthcare has been really good and has really invested in the care staff. They had a strategic plan by mid-March. We do a daily Covid update with all manner of detail, including infection control and deep cleaning, right down to meeting and greeting.

Every Monday, we do a thank you for the care staff that comes straight down from the (Dr) Pete Calveley, ourChief Executive and the reviews have been very useful. There is been a lot of good feelings towards care homes and we have been celebrating the kindness. We are trying to be mutually supportive. There is a huge amount of respect for the staff and a huge amount of responsibility for them, too. But they understand it. They get it. Right from the early days, the staff and residents have been very supportive to each other, even though the first two months were a baptism of fire – it was relentless.

The situation with families has been very challenging. Although they have been able to Skype or phone, the lack of visitors is really a problem in the care area. Of course, their new isolation means that a few of the residents have become quite depressed, but we’re doing our best to keep them connected to their families and to one another. Our good relationship with families has paid off. We are on first name terms with them now in a way that we never were before. There is a huge amount of trust and our team knows that, so we try even harder to be there all the time for our residents.

As far as health matters in the home are concerned, we are proud that the results of Whole Home Testing showed that we are Covid negative. Residents have had some hearing aid issues and some have needed to be seen by the optician – it’s good that our GP visits all dressed in PPE. It’s been very good for the team to use all their skills including hairdressing. Since it’s been warmer, the residents have been socially distancing in the garden and having ice cream and doing a quiz or just taking in the sun.

‘There’s been a lot of kindness and we all laugh and giggle together. Of course, you feel absolutely exhausted at the end of the day, but there’s nothing like a glass of wine to cheer you up’!

Hospitals aren’t discharging residents to some care homes – they are only using contract beds, even in this time of Covid. Of course, hospital staff don’t have time to develop the deeper relationships with the residents the way that we do. Sadly, they can forget – and lack respect for, the great age and needs of these special older people in our small community.

A touching moment of kindness, reported in the Lancashire Post has gone viral…

Kia, 17, from Blackpool, who has moved into the home to assist during the pandemic, was inspired to order this very special gift after noticing Ken would take a framed photo of Ada to bed each night. She said: “He would take this picture in a metal and glass frame off the wall every night. Knowing how important it was, I just thought there has to be a better and more comfortable way.”

She and the staff had no idea how far reaching the special moment would travel and just wanted to record the presentation as a heart-warming memory for Ken and the staff to remember this time.
“It was just an idea I had to do something comforting for Ken and when I brought it in and showed the team, my manager suggested we should record his reaction.

“Ken is fantastic, so wonderful, he speaks so much of Ada and how much he loved her, – in a strange way I know her without having ever met her just from the way he talks of her. He’s a real character and it’s the people I’ve met that have made this job so rewarding for me. It was my own grandma who suggested I give it a go.”

Ken, from Garstang, was just 17 himself when he joined the Navy. His service saw him take part in most of the important theatres of war including D-Day and in the Pacific for the preparations for the invasion of Japan, just before the US dropped the atomic bomb which ended the war. He left the Navy in 1946 and was awarded the Légion d’Honneur by the French Government in 2016.

He met Ada while out dancing, just one week after he moved to Liverpool – “I can still see that post she was leaning against with her friends.” The couple courted for two months before making plans to get married. He described proposing to Ada at a dance, adding: “We were always dancing. I used to fling her over my shoulder and we would jitterbug. It was lovely! She was the most caring, beautiful wife anyone could ever wish to have. She never did a thing wrong in her whole life.”

Kia added she hoped the attention from the video would help to put a spotlight on the role of carers during the pandemic and the work behind the scenes to keep the vulnerable safe. She said: “The NHS are amazing in what they are doing but we know so many carers and home care workers who are too doing their bit working every day to go place to place to make sure people are protected and looked after.

“It’s not an easy time and that needs to be recognised. Care homes are dealing with this too and the support is vital.”

If you would like to do the same thing for a friend, you can do it here: 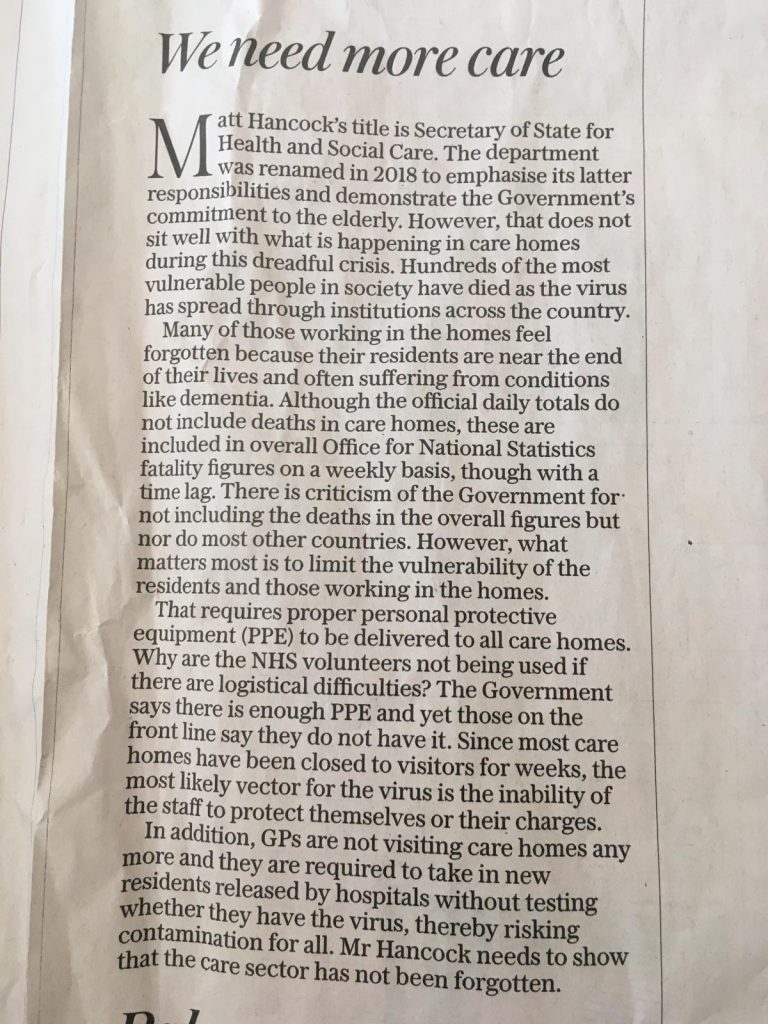 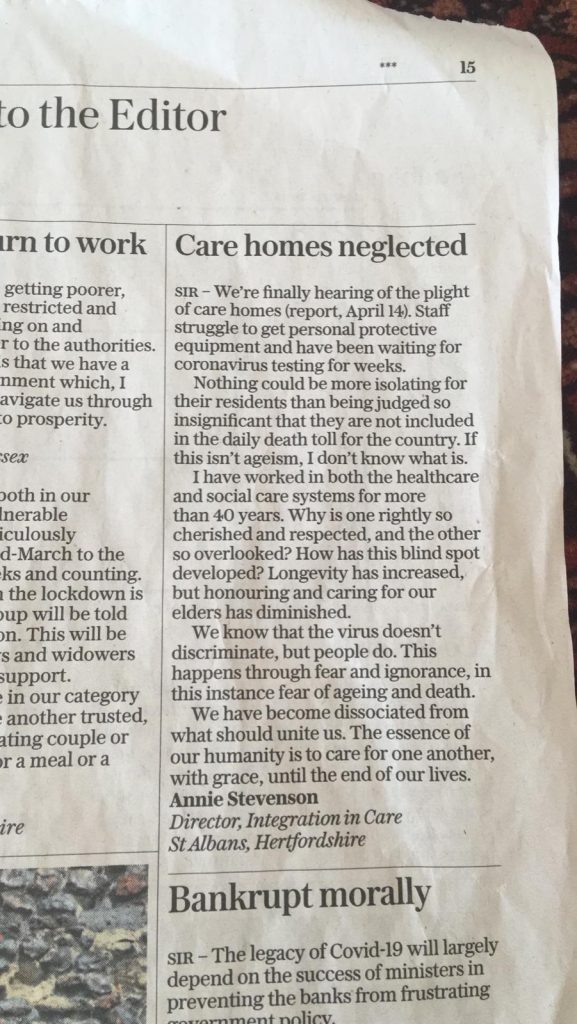